Bigg Boss 11 has become a household name during the last ten years or so. On one side, it has entertained the audiences in general while on the other side, it has also been an ideal platform for various film stars to promote their upcoming movies.

We have seen some of the enormous names from Bollywood to have made appearances in various seasons of Bigg Boss show for the promotion of their films. These stars range from Shahrukh Khan to Deepika Padukone to Shahid Kapoor to Bipasha Basu to Ranbir Kapoor and many others. 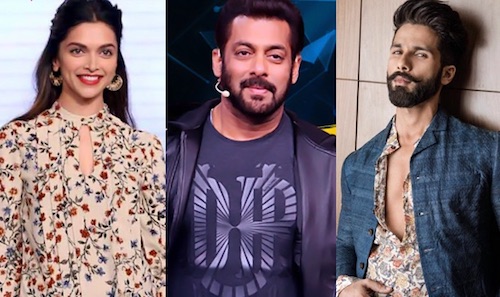 Now, it has been officially confirmed that Shahid Kapoor and Deepika Padukone are going to visit the Bigg Boss house to promote their upcoming movie “Padmavati“, which will be released on December 01, 2017.

Moreover, the two will also share the stage with Mr. Salman Khan which means that the viewers get to see some real fun on stage this weekend. However, it has also been confirmed that since Padmavati is a royal film, the Bigg Boss house will also be turned into a royal palace. Also, the housemates will be welcoming both Deepika and Shahid in a royal style.

The reports have also confirmed that the housemates have already started rehearsing for the said performance and it is also speculated that the coming episodes on weekend will be something really worth watching. Since this news, the audiences outside the house have been anxiously waiting for the episode to go on air this weekend.

All the fans of Deepika and Shahid along with those of Ranveer Singh (since he is also playing a very important role in the film) are really looking forward to the release of film in just about two weeks time. Well only time will tell how much this particular film is going to impress and audience and do the business on box office.