In today’s episode, Saba was seen questioning Jasleen and Anup’s relationship which did not go very well with Jasleen.

Bigg Boss called Dipika inside the confession room and gave her a letter asking her to read in aloud in front of all the housemates. The letter was related to the very first task of the season 12 of Bigg Boss. 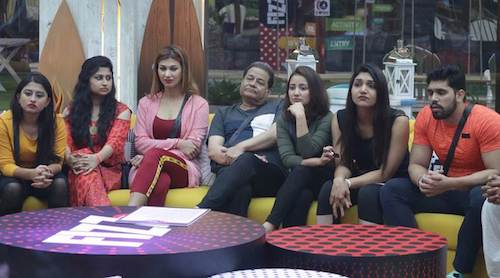 At the very start of the letter, it was very clearly mentioned that the results of the task will directly affect the first nomination, first captaincy and luxury budget. The task was called as “BB Press Conference” in which singles were supposed to challenge the pairs of the house. The challengers would try to prove that the pair was weaker and less deserving to stay in the Bigg Boss house.

The housemates would then decide with their votes as to whether the challenger or the pair was weaker. Moreover, Hina Khan and Hiten Tejwani from the last season also joined the task.

When the gong rang, the first pair who got challenged was that of Jasleen and Anup who lost the task, as they failed to convince the housemates that they were stronger. Next, Neha challenged the pair of Deepak Thakur and Urvashi but she herself was not able to prove that she was better and stronger than this pair.

Later on in the show, Somi Khan and Saurabh planned a pseudo fight so as to add some spice to the show, however, they were exposed soon and the housemates did not like it.

In tomorrow’s episode, Somi Khan and Saba Khan will come under the radar of the housemates. In addition, today’s task would be continued and Shilpa Shinde along with Karan will join the ongoing task as guests inside the Bigg Boss house.