Today’s Bigg Boss episode started off with Salman Khan mentioning that Rohit, Somi Khan and Karanvir have been nominated for tonight’s elimination.

Salman also mentioned that the King of Bollywood “Shahrukh Khan” will also be here tonight. Salman then talked to the housemates and connected appy fizz caller of the week as well. Salman then called Sreesanth and Romil to the wrestling ring. As always, there were two rounds, verbal and physical.

In the verbal round, Sreesanth beat Romil. In the physical round, both of them had to try to make each other fall from a plank using dumbbells. Romil went onto win the second round and therefore the overall wrestling competition.

Shahrukh Khan then joined Salman Khan onto the stage and both of them had a blast there. They played fun games with each other and entertained all. Shahrukh also talked to the housemates through video monitor and mentioned that he was there to promote his upcoming movie called zero. Shahrukh further told that his movie will be released on December 21, 2018 and his co stars in the movie are Katrina Kaif, Anushka Sharma and Salman Khan.

Salman and Shahrukh then asked the housemates that which other housemate they thought was zero and hero. All the housemates mentioned their opinions regarding this which obviously did not go well with some of the contestants. Salman eventually announced that Rohit was the one who had to leave Bigg Boss house tonight as he had got the least number of votes.

After his exit from the Bigg Boss house, Salman Khan mentioned that only two weeks have been left in the season and that the coming week will be the ticket to finale week.

In tomorrow’s episode, Dipika and Sreesanth will get into an argument and possibly a fight. Moreover, most important nominations of the season will also take place. 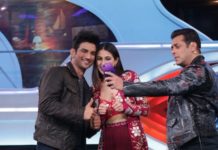